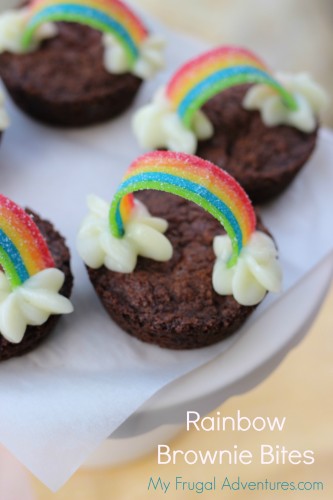 Last year I made cute little rainbow cupcakes for my little girl’s birthday.  They were a pretty big hit and my kids still talk about them from time to time.

This year when we were getting ready for my big girl to bridge over from being a Daisy to a Brownie in Girl Scouts, I started thinking about brownie recipes to make for the party.

Our troop leader decided to make it a rainbow themed party for the girls and of course it clicked for me to reinvent this treat as a brownie instead of cupcake.

Now these might look complicated but I promise they are so easy to make.  I cheated and used box brownies and just filled them about 1/4 of the way full to make a brownie bite. Then I used buttercream frosting to pipe on little clouds and cut rainbow candy.  That is it!

Actually my 6 year old did some of the assembly with me.  If you have any little parties or you want to do something special for classroom treats, this is a really fun recipe to save.

So to start you want to mix up a brownie batter —  I used box brownie mix but there is a delicious from scratch brownie recipe here.   I rubbed butter on the inside of a muffin tin and filled the tins about 1/4 of the way up with batter.  Bake according to directions. (One little tip is that I always slightly undercook brownies and let them cool in the pan just long enough to harden so I can pop them out.  By undercooking just a little you will get a nice gooey brownie not a hard as a rock brownie which can sometimes happen.) 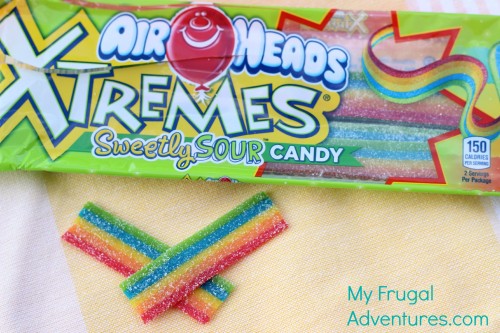 I like to cut the candies while the brownies are cooking, so each strip of candy can be cut into 3 pieces and that worked out to be a great size.  If you have larger cupcakes or brownies, obviously you want to cut them a little larger.  These candies are perfect but they can be hard to find.  I have seen them at Joann’s crafts and I usually buy them in the One Spot at Target.

Next you need something to serve as the clouds.  Whipped cream would be yummy but I like buttercream frosting because it is thicker and more sturdy to hold up the rainbow candy.

I mixed up the buttercream frosting recipe here to use for my clouds.  I cut the recipe into a third and that provided plenty of frosting for our clouds. 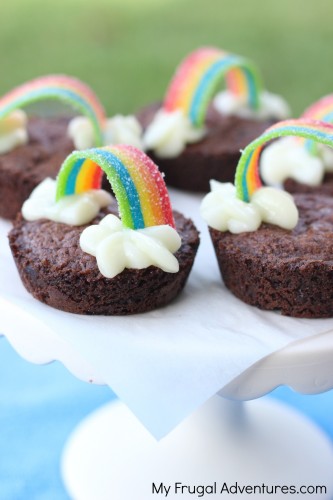 You want to add a tip to a pastry bag or large Ziploc container and carefully pipe on the frosting to look like a cloud.   Just a dab is perfect.

Working somewhat quickly, you want to gently push your rainbow into each end of cloud.  I made these on a very hot day and my buttercream was starting to melt so this was a quick process for me. After adding the rainbows, I popped the tray of finished brownies into the fridge.  That will allow your buttercream to harden and support the rainbow perfectly.

And now you are done!  Aren’t these the cutest things?  These were a big hit at the party and I got a lot of compliments.  I was really surprised that some of the kids licked the frosting and candy off and tossed the actual brownie.  I love that buttercream recipe and apparently many of the kiddos agreed with me :).

If you give this one a shot please come back and let me know how it goes over at your party!   Wouldn’t these be fun to make to watch the Wizard of Oz too?  That would really make family movie night special for the little stinkers.

And here are some other recipes you might enjoy: 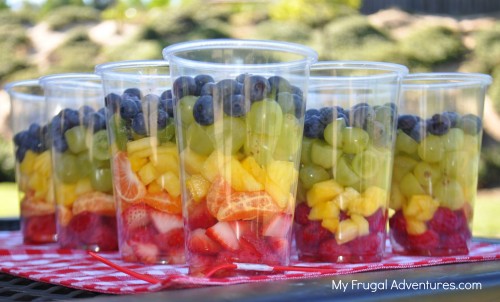 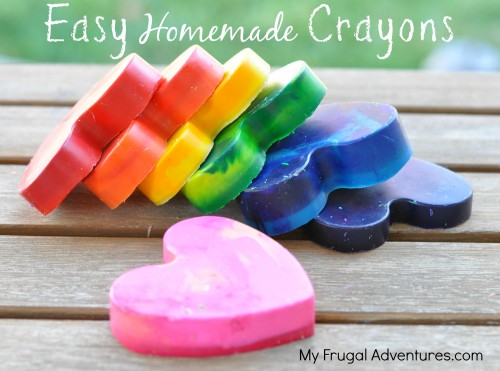 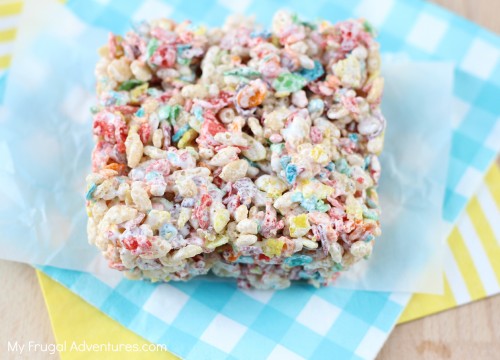 Rainbow Rice Krispies Treats- oh my goodness these were a HIT.  We put them in little cello bags for kids to take home at a class party.  They loved them.