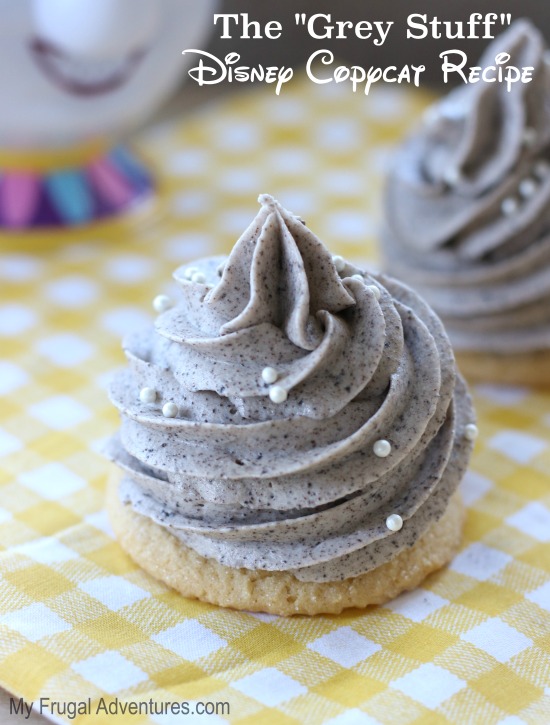 This is a fun and silly recipe for Disney fans or those of you that might be heading out to see Beauty and the Beast.  We saw it today and loved it!  Such a beautiful film- seriously don’t blink because every minute is more gorgeous than the next with costumes and sets and the scenery.

One of the lyrics in the song Be Our Guest is “try the grey stuff its the best!” and Disney created a “grey stuff” dessert to go along with that description.  In the original movie, the grey stuff looks like an ice cream cone on top of a flower shaped cookie or cracker.  So that is exactly what Disney created.  A whipped topping on a cookie.

We did try this dessert on a recent Disneyland trip.  People rave about the dessert and it did not disappoint. 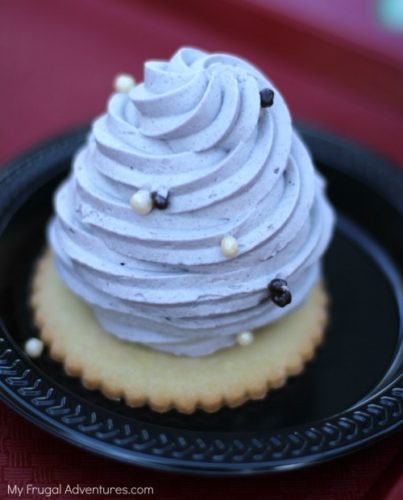 The grey stuff at Disneyland 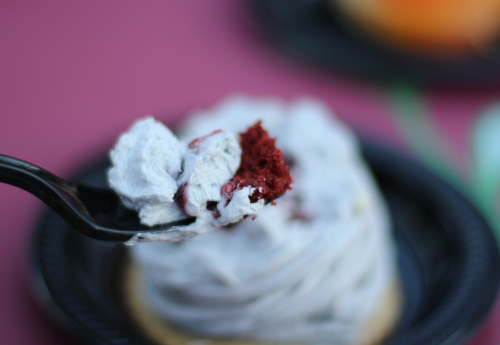 We did really enjoy this dessert.  It was a shortbread cookie with cake on top, raspberry puree or jam and a whipped topping- not quite a frosting but not whipped cream either.  I thought the raspberry filling would be disgusting but it was actually delicious and my favorite part of the dessert.

So I set out to recreate this recipe at home for a little fun for my girls.  Both were very excited to see the movie and both had so much fun recently at Disneyland- why not make something different and fun at home too!

So here is how I made my own Grey Stuff at home:

I made a cream cheese frosting to go on top of the red velvet cupcake.  I used the simple Buttercream Frosting recipe here to make it but please note this is not exactly the same as the original Disney version. The Disney version uses a mixture similar to vanilla pudding mix and tubs of whipped topping combined.  The Disney version was good but it does melt extremely fast- like before you get to your table on a warm day kind of fast.   I don’t typically bake with those ingredients either so I chose to just go with frosting instead.  If you want to substitute the pudding and whipped topping mixture for the buttercream frosting, you can find a recipe here. 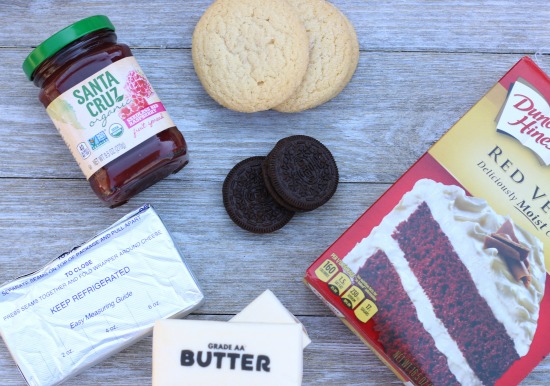 This is basically what I used plus confectioner’s sugar and vanilla. I found sugar cookies in the bakery section of our local store that were large enough for this recipe.  If you prefer to avoid the red velvet mix you can certainly substitute a yellow cake mix or make your own mix instead. 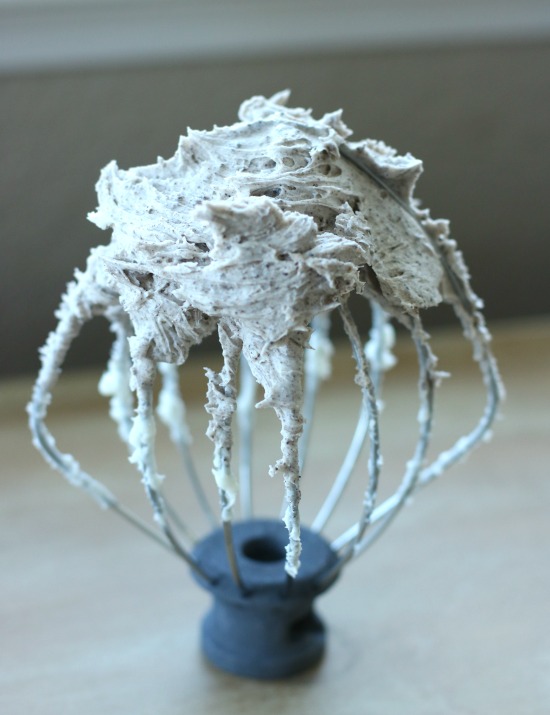 Here is my frosting once I added the Oreo.  I felt this was grey enough without adding additional coloring but you can find grey food coloring here to make the color even more pronounced. I added roughly 8 cookies to the food processor and then just mixed in the Oreo crumbles until I got a flavor I liked for the frosting.  I did have some crumbs left to sprinkle on top of the cupcakes. 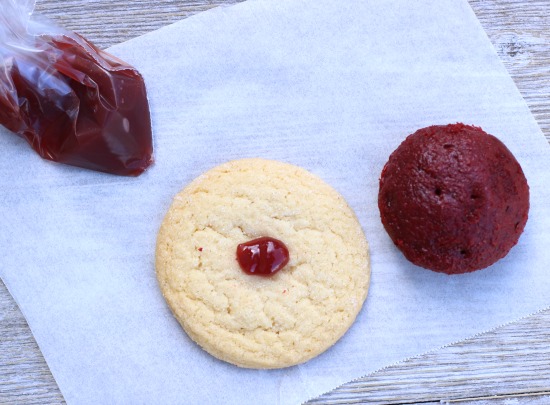 I put the raspberry jam in a sandwich bag and cut the tip to pipe the jam onto the cookie and on top of the cookie.  You can skip the raspberry but I thought it was tasty and it added a little brightness to the dessert. 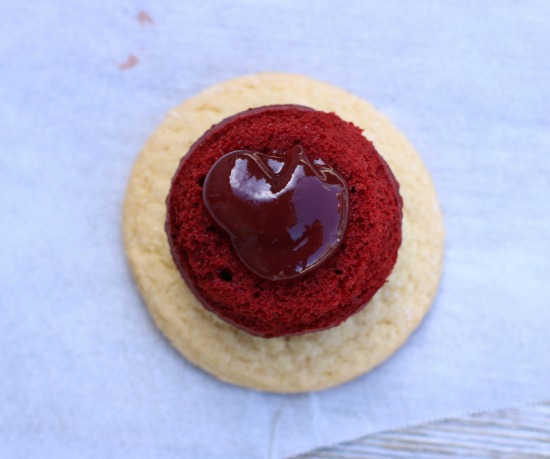 I actually placed the cupcakes upside down on the cookie so the larger part of the cupcake was the base which made it a little easier to frost. 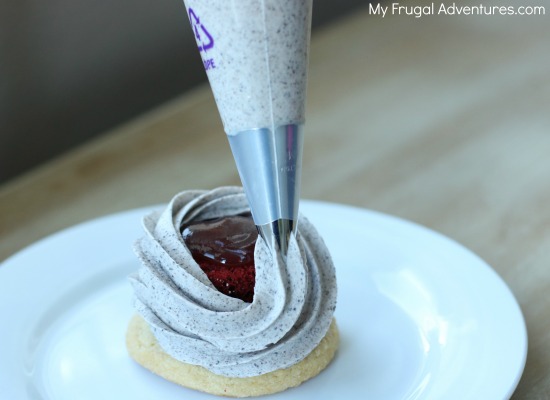 Once frosted I just added a little pearl sprinkles and if you like Oreo crumbs.

Here is the final product: 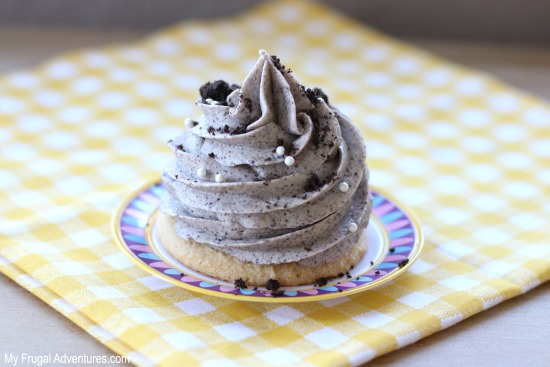 And to be honest this dessert was a little rich for us.  We liked it but it is a lot of frosting and a generous portion.  So I also made little mini cupcakes with the leftover cupcake mix: 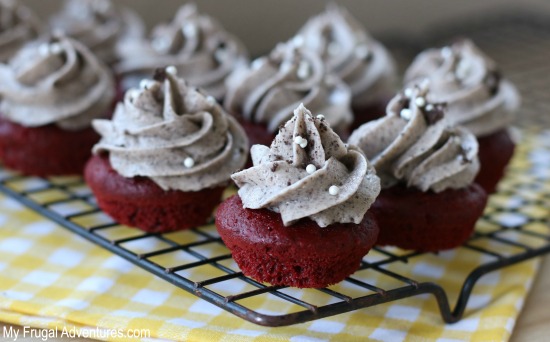 These little mini bites were actually our favorite.  Just the right size for little fingers. 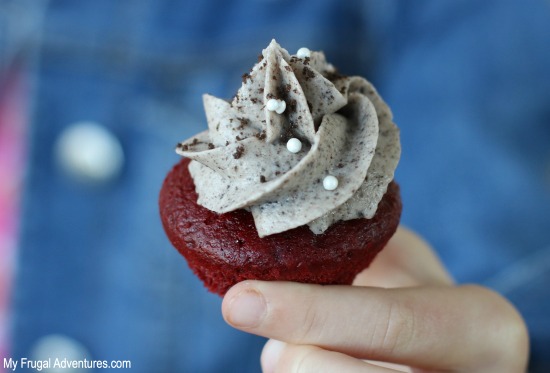 So there you have it!  The Grey Stuff!  If you try this recipe, please come back and let me know what you think!  I would make this again for sure but I would make the mini cupcake version and I would use a yellow cake mix instead of red velvet.

Here are a few supplies that might come in handy:

And here are a few other recipes you might enjoy: 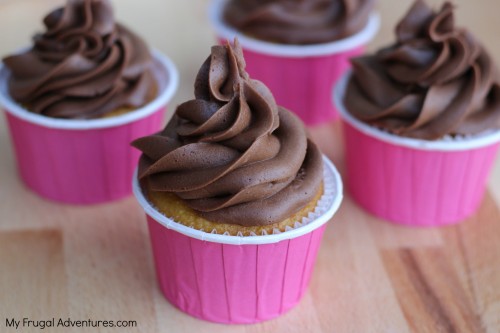 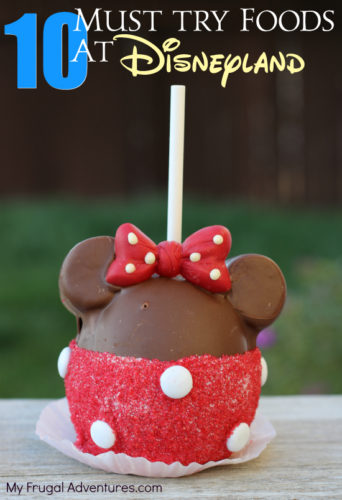 10 Must Try Foods at Disneyland