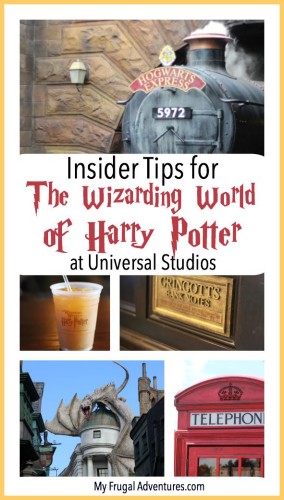 Oh boy you guys!  We just got back from trip #2 to Orlando, Florida to visit Universal Studios.  My little girl absolutely adores all things Harry Potter and the Wizarding World of Harry Potter is the main reason we make the long trip from West Coast to East Coast each year.

The first time we visited, we were really just overwhelmed with the Wizarding World.  It is so detailed and so perfectly captured and realistic… Truly something to see.  This time around we knew what we were in for and had a better handle on what to look for and experiences we didn’t want to miss.

So I have a bunch of tips for you, if you are planning a trip to Universal Studios!  You can find a more generalized guide to Universal Studios, Florida here but this particular post is just on the Wizarding World of Harry Potter.  For this trip we were incredibly fortunate to get a VIP tour guide from Universal Studios. We were lucky enough to get a guide that has been at Universal for twelve years now and was a gem- full of great info for us!  (She was even the tour guide that walked J.K. Rowling through Universal years ago before the Wizarding World was ever constructed.)

So here are a few things that super Potter fans might want to watch for.  Please note there are (2) different worlds of Harry Potter.  The first is on Islands of Adventure, where you will find Hogsmeade and Hogwarts castle.  You can go to the Universal Studios park and find Diagon Alley and King’s Cross station.  The best way to get from one park to the other (and note you need to buy passes for both parks to go back and forth)- is to take the Hogwarts Express train.

The train is a “ride” where you sit comfortably in a small train car cabin and a 3D show broadcasts out the window of the train.  You will see everything Harry might see on his travels to Hogwarts and back to London.  The cabin seats about 8 people or so and is cool and comfortable – don’t miss the closed door side of the cabin.  It is a glass screen and you might see Harry, Ron and Hermoine walking past and talking. 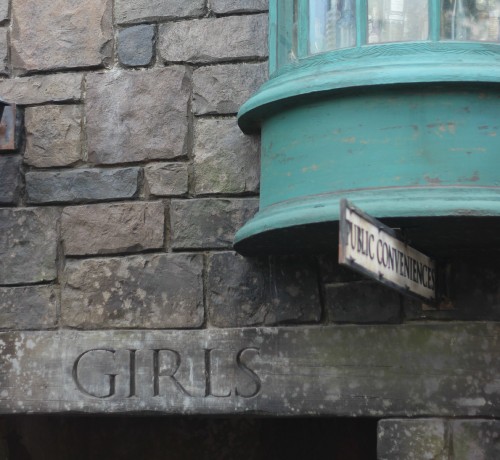 Moaning Myrtle.  Moaning Myrtle often travels via pipes from the castle into Hogsmeade so if you pop into the bathroom in Hogsmeade only, you will be able to hear Myrtle chatting away.

Specialty Drinks. There are special drinks in both worlds of Harry Potter but I like to stop inside the Hogs Head Pub.  You will find a slightly shorter line and it is nice and cool- they are attached to the Three Broomsticks so go next door for food.  Both Worlds of Harry Potter make specialty beer that you will only find in Diagon Alley or other varieties in Hogsmeade.  I like to get a Pumpkin Fizz.  It is Pumpkin Juice (which I far prefer to Butterbeer) but with a little carbonation so it isn’t quite as thick and sweet.  Nonalcoholic –so fine for the kiddos and mine sucked these things down in seconds flat- they are relatively cheap at $3. 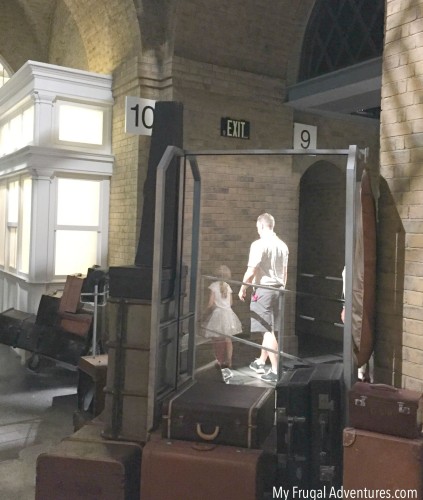 Hogwarts Express from London to Hogsmeade.  This is such a neat little detail and I don’t want you to miss it.  We missed it the first trip entirely.  As you are in line waiting to go to Platform 9 3/4, for the Hogwarts Express, there is a little optical illusion that appears as though you really do walk through the wall.  You will need to stay about 10 feet back from your family to catch a few snapshots and as you actually walk through it doesn’t look like anything out of the ordinary. That is my husband and daughter  entering the platform.

Gringott’s Bank. The dragon on top of Gringott’s bank will breathe fire about every 15 minutes.  This is so cool to see and you will find tons of people standing there with cameras at the ready- you can actually feel the heat from the fire about a block away.

Money Changing. Next door to Gringott’s is a money changer and you can change muggle money into Wizarding notes.  The wizarding notes can be used anywhere in the park for food or drinks and if you don’t use them by the end of the trip, just change them back to muggle money.  There is no fee or charge for this but when we went it was only $10 and $20 bills they would change.  So kind of an expensive souvenier if you want to save your notes.

Goblin Inside the Money Changing Station. This goblin has a bit of an attitude and you can actually walk up and ask him questions and he will answer you.  Us: “Have you seen Harry Potter or Hermoine today?”  Goblin: “I do not have time to track the whereabouts of Gringott’s customers!”  This is a fun little stop to make. 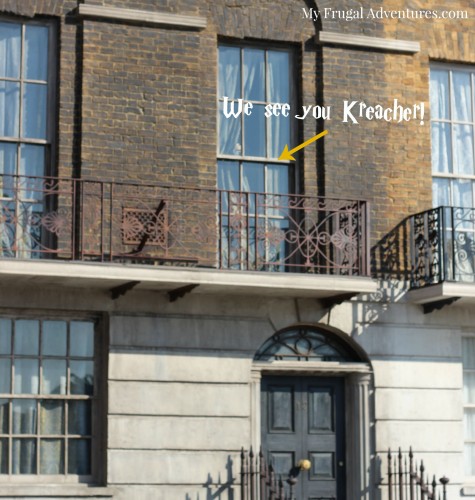 Find Kreacher in the Window. Before you enter Diagon Alley from London, you will see the Night Bus parked outside and a row of houses on Grimmauld Place.  Watch carefully on the second story and every few minutes, Kreacher the House Elf likes to peer out the window to look at the street below. You will see a few other house elves throughout the Wizarding World- make sure to look up in the rafters at the Three Broomsticks to find one dancing. 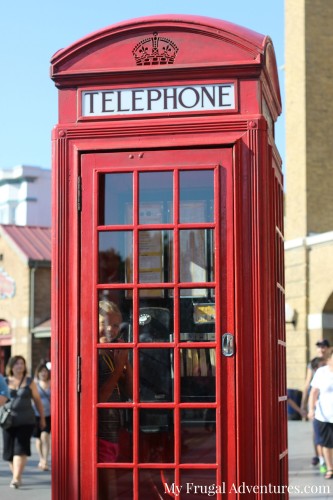 Red Phone Booth in London. This is a cute photo opp and if you step inside and dial MAGIC, you will get a message from the Ministry of Magic.  (Don’t worry about forgetting, the phone number to dial is listed right on the phone.)  Sidenote: My children had no idea what a phone booth was and how to operate the phone inside. LOL. 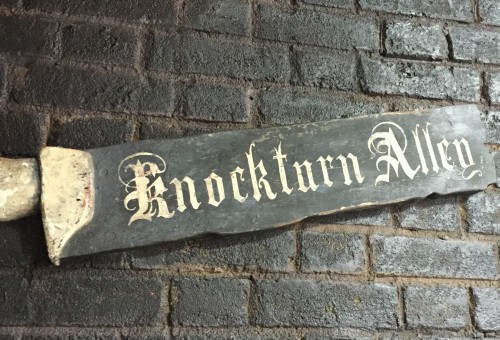 Knockturn Alley.  It is easy to walk right past Knockturn Alley inside Diagon Alley.  There are just so many details everywhere, the entire place can be overwhelming.  In Knockturn Alley, you will see a side window of the Magical Menagerie shop.  The window has a giant snake that speaks parseltongue just like in Harry’s trip with Dudley to the zoo when the snake escaped.  Inside that same shop, you need to look up and see a Crumple Horned Snorkack.  (Luna Lovegood’s favorite.)

Borgin and Burkes. Look for this shop and in the far back you will find a vanishing cabinet.  This is what Malfoy used to sneak Deatheaters into the castle- but when he was first testing the cabinet he used a bird.  Put your ear up to the cabinet and you can hear the bird inside.

Florean Fortescue’s Ice Cream Parlor. This isn’t really hidden but don’t miss out on your chance to try all sorts of fun flavors of ice cream.  They won’t give out samples so you just have to choose but there are fun flavors like orange marmalade and peanut butter and jelly and Earl Grey tea with lavender. 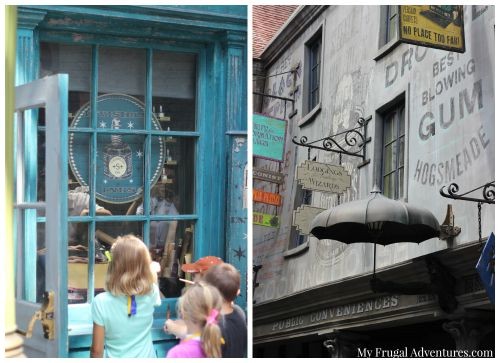 Hidden Magic with Wands. If you purchase the wands inside the Wizarding World, you can do magic at various spots inside either Wizarding World.  The spots are noted with markers on the ground and also on a map that comes inside the wand.  There are secret hidden spots, not on the map.  You want to look for the tell tale red dot light at the following places: Slug and Jiggers and Scribbulus.  This one isn’t hidden but make sure to watch out for the umbrella outside the bathrooms in Diagon Alley.  The metelojinx will make rain and thunder sounds and it actually starts to rain around the umbrella. 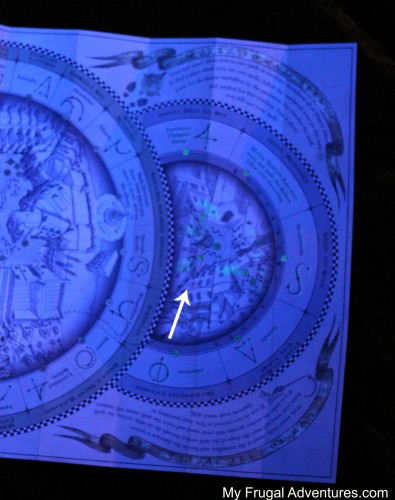 One last little tip if you get the wand, head over to Knockturn Alley and look for a Black Light shining down.  Put your map underneath to see some hidden secrets.  We didn’t have time to really look into this as we finally tried it on our last day just before leaving.  I’d ask at Ollivander’s or Gregorovich’s shops for more info.  You can see on our map above there was definitely something showing up on the map under the black light, we just didn’t get a chance to investigate further.

Madam Malkin’s Robes for All Occasions. This is so fun.  Pop inside this shop and look for the full length mirror in the center of the store.  The mirror will comment (not always nicely) on your appearance.  She thought my daughter’s shoes were very nice and thought my other looked looked fantastic that day.  She declined to comment on my appearance but I suspect it was the people refusing to wait their turn behind me that made the mirror go silent 😛  You will see a gorgeous dress next to the mirror that changes seasons magically.  Very cool little store to pop into.

And here are a few other things you might enjoy: 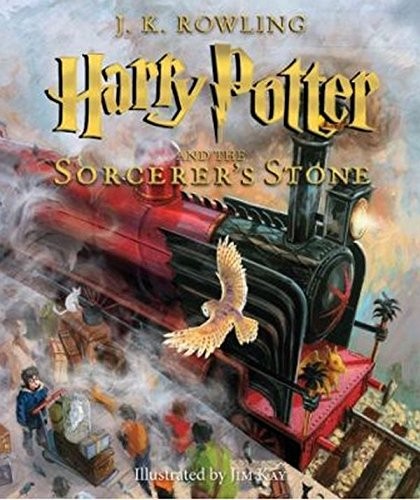 Preorder the new Illustrated Hardcover edition of the Sorcerer’s Stone as well as a really cool coloring book. 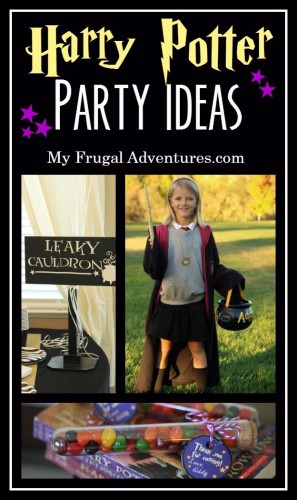