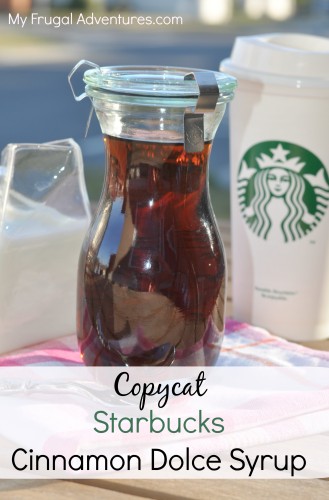 I posted this recipe a long time ago to use in the Copycat Starbucks Caramel Apple Cider Recipe (so yummy by the way!)

I thought I would post the recipe to make just the syrup separately though.  This syrup is really simple to make and it makes your regular coffee taste so fancy or I like this in an iced coffee.

It is also really good on pancakes if you want a little extra treat. For those that are not coffee drinkers, you might try this with a bit of warm milk for a fairly low calorie alternative to hot chocolate.

Since the flavor of Cinnamon Dolce is basically a cinnamon simple syrup, you can make it yourself really quickly at home:

The cinnamon won’t dissolve completely but that didn’t make a difference to me.  Store in a sealed container in the fridge for several weeks.

I have purchased the Cinnamon Dolce syrup at Starbucks (I think it was about $11 for a giant container) and I personally don’t taste much of a difference at all in side by side tasting.  I actually think I prefer this because you know exactly what is going into your body- sugar + cinnamon.  In the actual syrup there are so many additives.

To make a Cinnamon Dolce Latte at home just brew strong coffee (I brew a 4oz espresso in my Keurig) and I fill the rest of the cup up with milk and then add about 1-2 tablespoons of this syrup.  A little goes a long way!

This is very good over ice with the same method.  And now pat yourself on the back for saving $4.55 on that Starbucks drink 😉 . 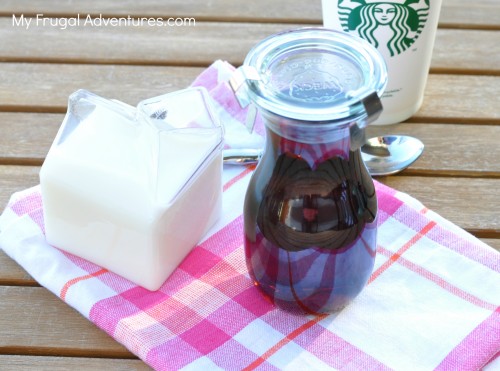 And here are several other Starbucks Copycat Recipes to try!