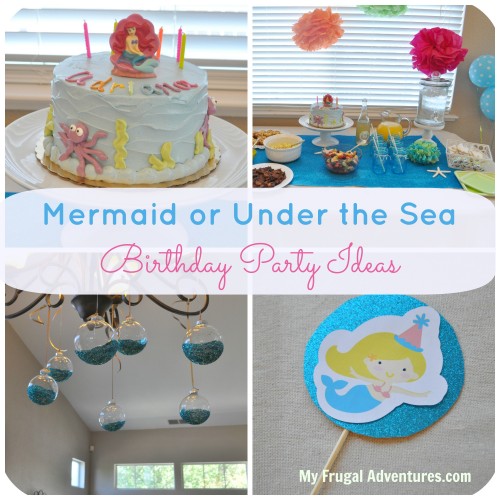 So we had a little mermaid birthday party for my (now) 6 year old over the weekend.  I know Mermaid or Under the Sea parties are so popular so I thought I’d share a few of the things that I did.

I did all of the decorations and such myself and I did it all the week of the party.  I spent a few hours each night after the kids went to bed doing various things to get ready for the party- so this isn’t an extravagant party fit for a magazine but it was bright and cheerful and my little girl was very happy.  I haven’t added up all the receipts yet but with all the food and decorations I would say we spent under $100 on this party for 10 people and there were a ton of leftovers (plus I splurged on a cute birthday cake!)

I usually start my party planning on Pinterest- you can see a Mermaid Party board I started that has lots of cute inspiration.

Those parties are often from professional planners and people way more talented then I am with a glue gun but it gives you great direction to get started.

I try to plan parties around a general theme- such as Mermaids instead of something specific like the Little Mermaid with Ariel.  The reason for that is so I am not stuck chasing around all the decorations with Ariel’s head on them.   Intially I was going to stick with blue and green for the party but my little girl loves bright colors and rainbows so I added a dash of pink and orange here and there to make it super bright and colorful. 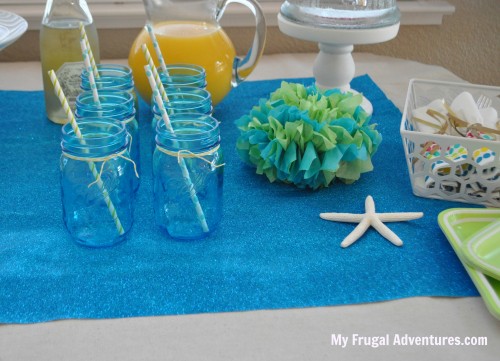 So the first thing we bought was a canvas drop cloth from Lowe’s for the tablecloth.  It was 6ft x 9ft so a great size and it was only $9.00! We can reuse that over and over and I can paint it if needed for another party.  In this case I thought the brown color looked a little like sand- so perfect for our party.  (The dip dye technique I told you about here would be awesome for one of these drop cloths if you want bolder colors).

Next was one of my favorite parts of the party- I found glitter wrapping paper at Michael’s for $5.99 ($3.59 with a coupon).

I unrolled that right on top and I love how it looked.  I can’t wait for the holidays because they have red, gold and silver and those colors will look really beautiful for Thanksgiving or Christmas. 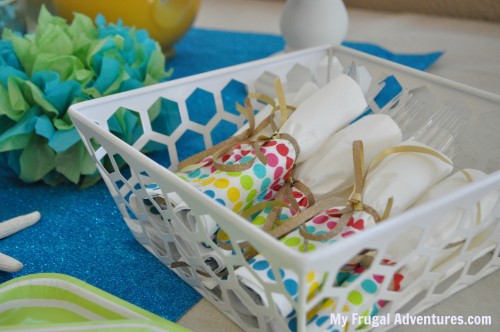 Initially I planned to use the cute little chevron bags to tuck utensils in and I was going to have them at each setting (see how great that looks here) but since we had a buffet style meal, I decided wrapped utensils would be easier to grab.  Michael’s also has really pretty glitter curling ribbon for just $.99.  It looks beautiful in person- just the right amount of shimmer.

I picked up cheerful plates and napkins at Target. 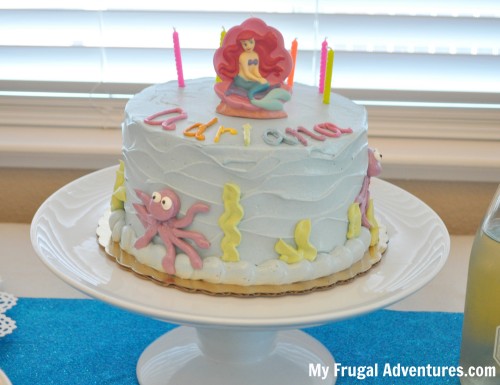 We got the birthday cake from Whole Foods.  I thought they did a great job and they use all natural food coloring so I was very pleased with how bright the colors look.  Adriana loves carrot cake so we have carrot cake with cream cheese frosting between the layers and buttercream on the outside.  I asked for her name in rainbow and just a sea/mermaid scene on the cake and then we got a cute little Ariel candle at Michael’s.  Don’t you hate when a cake looks pretty and tastes terrible?  Well this one was DELISH!  This is the type of cake that has fork marks on it after the party from people sneaking a bite or two.

I saw tons of amazing ideas on pinterest for adorable cookies and candy and such to make a dessert table but we had this party early in the day so I decided to just roll with cake.  I am not a huge fan of sugar overload at parties either- I like to provide real food because people seem to have a better time with a full tummy.

So this party was in August in Sacramento which is hot, hot, hot so we had the party at 10:30am.  I made it a brunch so we could eat outside and enjoy the sunshine without melting away. 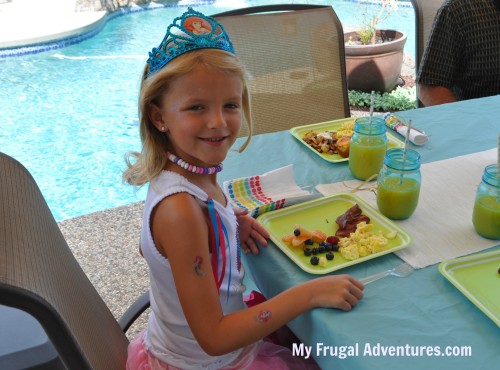 Plus everyone likes breakfast foods so we had Cranberry Orange scones, roasted potatoes, scrambled eggs, bacon, fruit salad (drizzled with honey and lime) and these amazing Spinach Dip muffins that I love (recipe from Picky Palate.com).  For drinks there was coffee, water, orange juice and a little champers (not real champagne we got Sofia Sparkling wine which is light and fruity and yummy).

This is what the buffet table looked like and then we actually sat outside by the pool to eat. 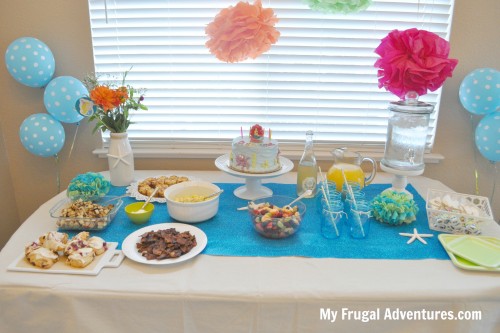 One of my other favorite decorations from the party were these little bubbles I made to dangle from the chandelier.  I was at Michael’s and they already have Christmas ornaments out (in August) and I thought the clear glass bulbs looked like bubbles.  I was debating whether to leave them plain or add some sand inside and finally decided to use a little Mod Podge on the outside and shimmery blue glitter. I couldn’t get the light right in the room for a great photo but they were really pretty in person -and note the fingerprints because the kids could not stop touching them ;). 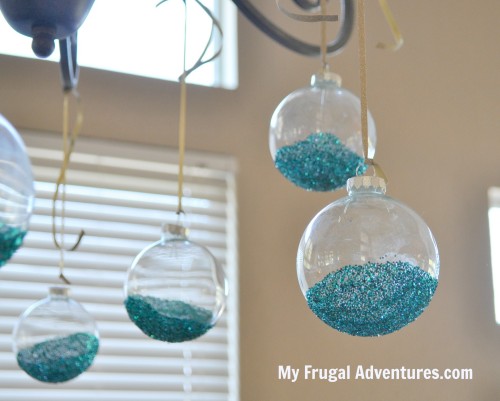 The other decorations we made were tissue paper poms.  These are super cheap and so simple- you literally need tissue paper and some sort of string and about 10 minutes time.  You can make any size you like and any color. 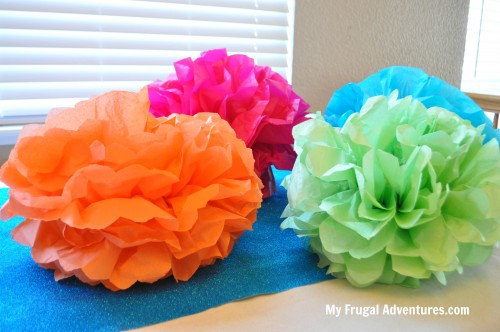 I bought tissue from Target for $1.25/pack and got 2 large poms so they were about $.60 each to make!  (I will do a tutorial on how to make them soon).  I did larger ones to hang from the window as a backdrop and then a few small ones for the buffet table. 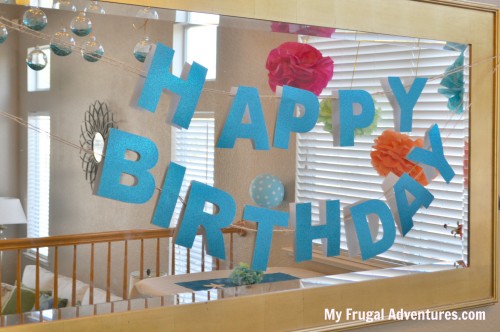 I cut a little birthday banner out on my Silhouette Cameo using glitter scrapbook paper that was only $.33 per piece at Joann’s.  I fit 4 letters per page so the entire banner was only $1.32 and I strung it using twine we had already on hand.  There was leftover glitter paper so I used that to make little Mermaid sticks to tuck in here and there on the table. 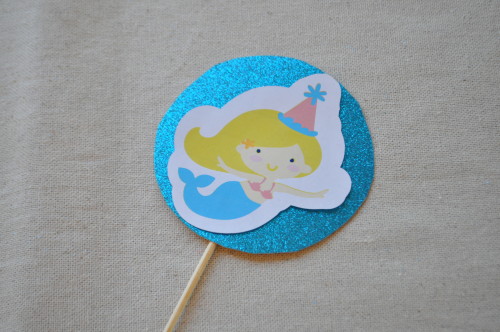 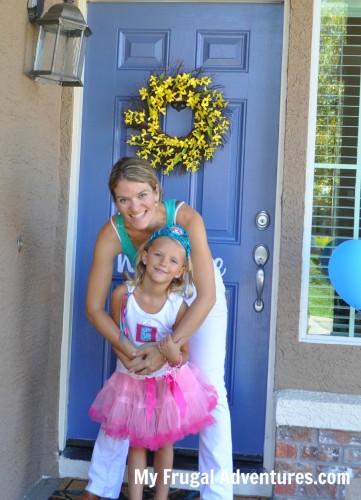 Oh and two other little things that made the party- Adriana wore a cute little Birthday Girl shirt and skirt for the party (from Zulily) but one of her gifts was a mermaid Ariel costume.  We got this at Costco for $19.99 and I highly recommend.  They are shiny and lovely in person and not itchy or uncomfortable to wear.  I also found an Ariel Princess Crown at Party City for $1.99.

Oh and at the last minute I was like- holy smokes what do I wear to a Mermaid party?  And Old Navy to the rescue!  Cute ombre tank top for just $7 on clearance. (Dear Charlene, you need to stand up straight!) 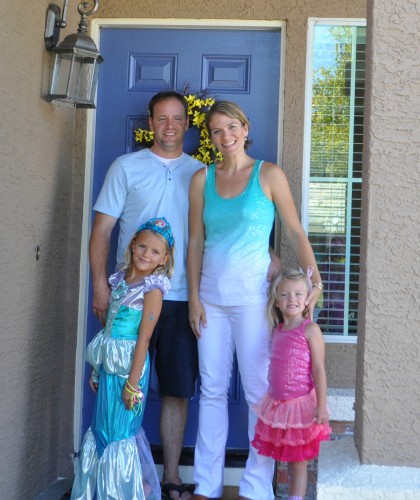 (strutting her stuff in her new Mermaid costume)

The very last little detail I will mention is some inexpensive blue Tulle.  I initially bought this for just $.70/yard at Joann’s to use on top of the drop cloth.  I thought it looked like waves  but once I spotted that glitter wrapping paper I decided to scrap it.

So instead I cut it into 4 pieces and tied it with ribbon on the back of our old kitchen chairs (which I think are an eyesore anyway) and that was where her birthday gifts were. 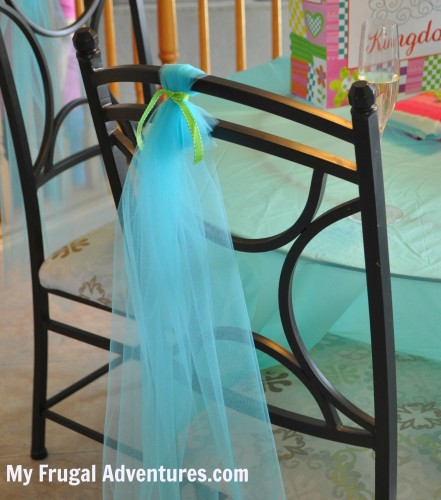 Anyway that little detail got tons of compliments.  It looked really pretty with the sun streaming through the windows.

As for party favors- we planned this party for about 20 of her little friends.  Someone was a real stinker for a few weeks at the beginning of summer and her punishment (once I reached my limit of sassy mouth) was to take away her party.  We agreed to a small party for close family and we didn’t invite all her little friends (#meanmommy).

I didn’t need party favors as a result but the ones I planned to do were these from Hostess with the Mostess– little nail polish and a necklace in a chinese food box. Super cute and something that would not get tossed away as junk. 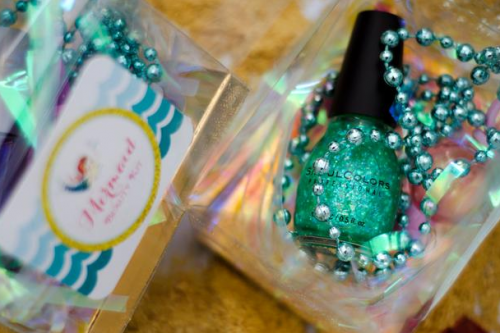 So there you have our Mermaid Birthday Party!  You can see tons more inspiration for cute party and entertaining ideas from my Pinterest board.