Well, it’s looks like we can get an even better deal on Hormel Party Trays.  There is also a Target coupon for the party trays that makes for a great deal.

The large trays should end up being about $4 after stacking coupons:

Here’s how the deal looks: 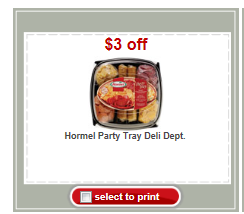 Remember the coupon is for 28oz size which is the big one but this really is an awesome deal if you like these things!  About 70% off!

You can see more Target deals for the week here.