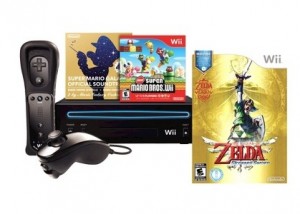 I mentioned this in the weekly deals, but I also wanted to let you know this is available to order online.

The entire bundle is priced at $149 which seems like a good deal to me since that Zelda game alone is probably $49.

I did see a blue Wii console for $99 in the Walmart ad for Black Friday.  They are also featuring this Zelda game for $60 in the same ad.

Head over to grab your Wii bundle and note you will have to pay about $7.50 for shipping unless you have a Target Red Card and then it is free.

*I guarantee this will sell out so don’t wait to order.